Hello, fellow Santa Claritans. It’s your neighborhood spokesperson, Loreal Renee, checking in from Westerly, a suburb of Rhode Island. I’m visiting the East Coast, and I have noticed some distinct differences between the suburbs here and the suburbs on the West Coast. Let’s discuss some comparisons… 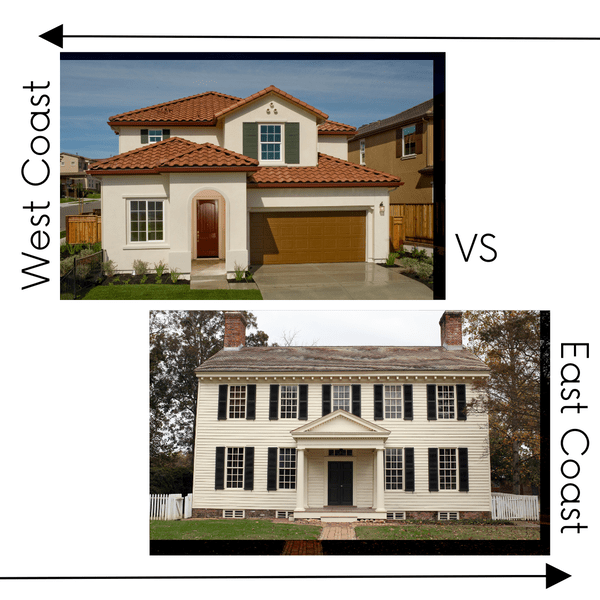 The Atlantic and Pacific Oceans are separated by more than three thousand miles. Even though, in the grand scheme of things, that may not seem like a lot, it is enough to significantly alter the architectural styles of these two coastal areas. Depending on which ocean you are on, the cultural influences, climate, and environmental effects are all completely different.

We’re used to the familiarity of stucco homes and red-tiled roofs in Santa Clarita. This influence from Spanish and Latin America comes from the Spanish conquistadors. While the East Coast is extremely influenced by Victorian architecture, from British and other European settlers.

The East Coast is adorned with historic and traditional homes made from brick and stone with basements, as opposed to western homes that emphasize above-ground living, such as Craftsman bungalows, Spanish Colonials, and flat-roofed contemporary properties.

Being from a suburb like Santa Clarita, with so many Spanish Colonials all looking the same, packed in as tightly as possible to get as many homes per sq. mile, allows me to appreciate the historical and classic appeal of East Coast suburbs. Each house has its own personality on the East Coast, but they don’t have the innovation of a commercial California suburb. We are blessed with convenience in Santa Clarita. Everything we could ever need is within the bounds of our suburban utopia. Interlocking freeways with a Starbucks every 0.2 miles and an In-N-Out. On the East Coast, you may have fall and snow, but we’ve got sun all year round AND In-N-Out. Who’s the real winner here?